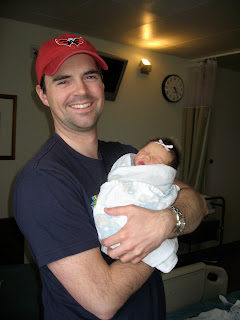 Our new little girl arrived May 22nd at 12:28 a.m. She is 6 lbs. 12 oz. and 20 inches long. Captain F and I didn't get to the hospital until just after midnight. We had to pull up to the emergency room entrance because there was no way I could walk myself to labor and delivery. Sadly, there was no time for an epidural. I had to do it the old fashioned way. My cousin's wife just had her baby natural. On her blog, she said how she was surprised that a few screams escaped her. I remember thinking, "You screamed? Couldn't you control it?" I mean, this girl is tough. She has run several marathons, including the Boston marathon, and been in the navy. And now I have to admit that I, too, was surprised when a few screams escaped me. I know it startled Captain F. I really couldn't believe it myself. When it happened I thought, "Was that me?" The doctor and nurses thought I did great, though. The doctor was very nice and would tell me when to push and that I was doing such a great job pushing. He said one good push would be enough. Well, it took a couple more pushes than that, but obviously she came fast. The funny part is that the doctor kept telling me to push harder and keep going and I remember thinking, "Push harder? I am pushing as hard as I can. There's another level?" I told this to Captain F later and he said, "It goes to 11." We laughed and laughed. The delivery did go well and the baby is fantastic. She's got lots and lots of hair. Little V loves to rub her hand on the baby's hair and exclaim, "Id tickles." The Prince just adores the baby. He always wants to hold her and give her kisses. 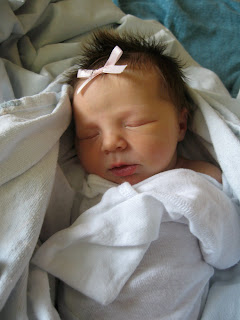 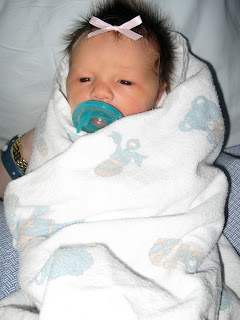 Here are some photos of me, Captain F, The Prince, and V when we were all about the same age as the baby. I always love to compare how the kids look and who they look like. My mom says the baby looks a lot like I did. It's nice to have one of my kids look like they belong to me. 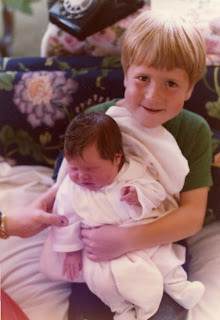 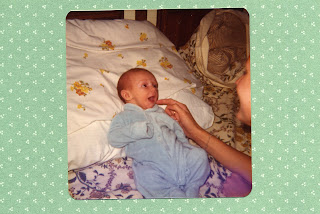 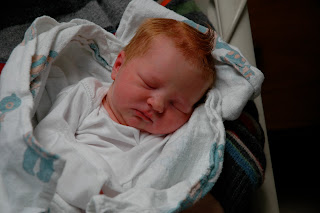 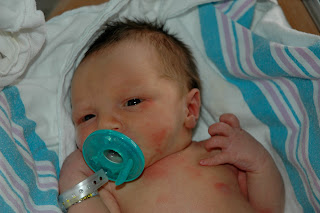 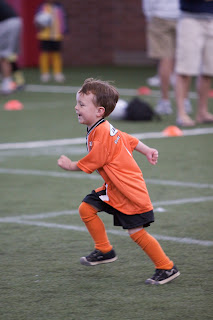 We signed the Prince up for soccer for the first time this Spring. He started in March and it ended last week, on May 8th. There were seven games total. Watching pre-Kindergarten soccer is fantastic. It really is great entertainment. There isn't much pressure; the kids basically just run in a pack after the ball, and some don't even do that. Some of the players dance around the field, some play with their buddies totally unaware of where the ball is, and some don't play at all. My kid isn't any of those. He cares. At his first game he was so excited and convinced that he would get a goal. When the game ended, which was disappointing enough, without him getting a goal he was undone for 20 minutes. He cried as hard as he ever cries. The next week we were in St. George and missed the game. The following week he didn't get a goal, either. Well, he got a goal but it was in the wrong net. It was heartbreaking to tell him that he needed to get a goal in the other net. He had been so proud and had such a look of joy. He cried and cried at the end of the game. It was about at this time that Ootsie told us a story about Grandpa Canadian.
Grandpa played professional hockey in the Red Wings organization. I think he only played until he was 19 or 20 because he injured his back on a goal post. This was when the posts were cemented into the rink. Anyway, she told us how Grandpa cried after every game he lost, even when he was a pro. I started to laugh and laugh. Obviously, this is genetic! How am I going to teach a 3-year-old not to cry if Grandpa's mom couldn't even teach an adult? There is a very strong competitive gene there, and believe me, my family has its own competitive strong streak. And for those of you who are thinking I am a good example of it, you would be wrong. I am nothing compared to my mother. In fact, when I told her about Grandpa Canadian she said, "I never cried when I lost at tennis," with disdain, pride, and superiority in her voice. For those of you who don't know, my mom was ranked 3rd in women's tennis in the USA when she was just 14-years-old, the highest national ranking any woman from Utah has ever achieved. I told her that she was just manifesting another version of the exact same competitive gene, like "I will not be one of those people that cry because I am better." She didn't like me discounting her achievement, but she had to agree I was right. So, now you know what I am up against! We can only hope that the Prince actually has some ability along with his very strong desire.
I know you are dying to learn the rest of the Prince's soccer record. I think it was at his next game that he got his first goal and followed it up with another for good measure. He was so excited to have 2 goals. Of course, no one was more grateful than Captain F and I. I had been hoping and praying that he would get a goal that day. It was then that I realized my life was going to be tied to a stupid sports goal. How had this happened to me? The next game he almost got like three goals, and particularly one where he kicked the ball all the way to the goal and then stopped. I think he thought it had gone far enough, but it never quite crossed the line. We were dying. He cried again. The next game he got two more goals. Surprisingly he cried at the end of that game, too. He said to Captain F, "But I no get one two three four goals." What can you do when they get upset about the goals they didn't get? Seriously. In his final game he got one more goal and would have had another one, but the other team's couch blocked his shot at the goal line for no reason. He claims he heard the ref blow the play dead. Believe me, the refs aren't that strict and who stops a goal of a 3-year-old. Really? Plus, he is the coach, not the player. But, it didn't matter. That was the day they passed out the soccer trophies to each kid. That was enough to make the Prince's entire day and week. I wasn't at that final game because I went to my nephew's baptism. Afterwards there was a lunch at my brother's house. The Prince came charging into the lunch triumphantly carrying his trophy. He was the conquering hero. 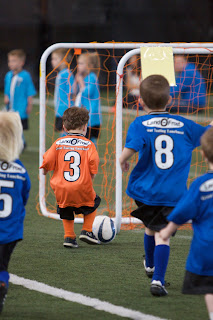 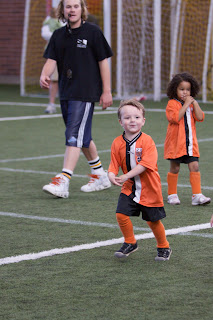 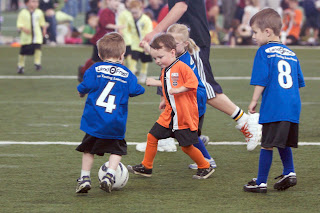