OK. So. I am not trying to be a product promotion blog. (I don't know what kind of blog this is . . . mostly a boring one). And I know I just posted about the Madsen bike, but I really think they are wonderful. But here is another product that I absolutely love. You probably already know about it (I am a johnny-come-lately most of the time) but just in case you don't I wanted to tell you all about this great product. It is Mrs. Meyer's Clean Day Countertop Spray in Basil sent. Aunt Brat gave this to me for my birthday and she said it would make me want to clean it was so wonderful. She was right! It makes my kitchen smell fantastic. Your whole house gets a lift. It cleans, degreases, removes odors. Your basic all-purpose cleaner. Captain F is a big fan. He loves to walk in the house and smell this when he comes home. He wants me to use it to clean everywhere. I love having a fresh smelling house, but I really don't like candles. No, it isn't even that I don't like candles, but they seem like such a hassle and not as pure a scent as I like. This is perfect. Also, and this is not the major selling point for me but I do think it is nice, it is earth friendly. Certainly a plus. Go out and buy it. You will love it and I think it is only around $4. Totally worth it.
Posted by Tin at 8:22 PM 1 comment: 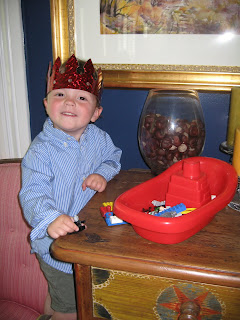 It is the Prince's birthday today! Hooray. He is three years-old. We already had a party for him last night with the Canadians. We have a neighborhood party with some families tonight where we will also have cake and ice cream and sing to him. The party really isn't for the Prince, but he will never know. Then there is the neighborhood carnival party tomorrow. Finally, on Sunday we will get together with my family for dinner and more cake. I don't think the Prince will miss a kids party one bit.

The Prince had a great party last night. We went to my parent's house and went swimming and BBQed. Aunt Brat gave the Prince water guns. He loved them. He spent the entire time trying to get El Senor's girl with the squirt guns. She was a great sport about it. The Prince would hold onto either Captain F or me and direct us to follow El Senor's girl around. It was so funny. How did he know to pick on the new cute girl? Then we ate dinner and had cupcakes for dessert. The Prince loves to have people sing "Happy Birthday." Finally, and he had been very patient, he opened gifts. He sat in a big red chair and got to open his gifts. He loved everything he got, which was mostly Iron Man or Star Wars related. It was the perfect night. And, I am happy to report that he was a very nice boy all night. He gave lots of kisses and said lots of thank yous. After the party he said, "Daddy. Dank-you. Dank-you ah my par-y. Dat fun par-y. Dat fun." He stayed up until 11pm he was so excited. Plus he woke up in the middle of the night and wanted to play with his new guys, which I didn't allow. Then he woke up at 6:30-ish for the day.

More birthday pictures and reports to come, seeing as how this is an all weekend affair.
Posted by AJM at 3:00 PM No comments: 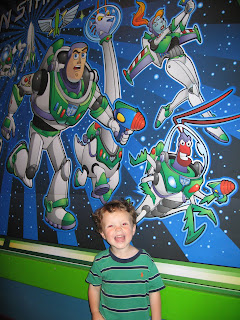 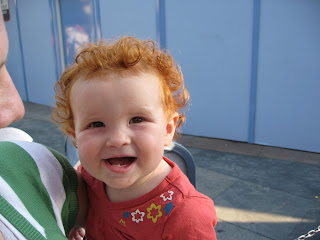 The funny thing about our trip to Disneyland is the story behind it. We weren't planning on going on any vacations this summer except to my cabin. Then in fall, we were going to try and go to Disneyland once we saw how the year was shaping up. But around May 1st Captain F started to joke he wanted to go to Disneyland with the kids. More and more he started "joking" about just going. I could tell the joke had started to take root. And by May 7th he started checking into prices and soon thereafter booked the vacation. I started to tease him that he didn't even make it to June before he cracked under the no-major-vacation-this-summer plan. But I can understand. Upon thinking about it, I decided that in the fall you don't really need a vacation, although we plan to still take it, but you need a vacation in the Spring just to shake of that last little bit of winter blues. All in all it turned out to be a well timed vacation. We were even there on my birthday and got a $69 gift card to spend on merchandise. That was great. We are thinking we should time our October visit for Captain F's birthday.

Oh. And I did find another picture of all of us together. 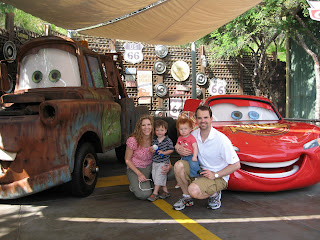 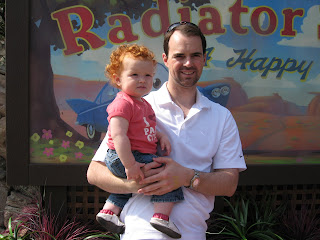 Little V can't get enough of looking at all the Disneyland pictures and video. In the middle of the night when she wakes up, which has been often lately because she is teething something fierce, she points to go into the computer room and look at the pictures. It quiets the crying and brings squeals of delight instantly.
Posted by Tin at 10:16 PM 2 comments: