It is Fabuloso's Grandpa's birthday today. He is 80 years-old! We are so excited for Grandpa and are sorry we can't be with him to celebrate. He is lots of fun; we love it when he comes to visit. He tells great stories and jokes. The first time I met Grandpa was on my honeymoon. Fabuloso's grandparents couldn't come to Utah for the wedding because his grandmother was in bad health. Instead, we went to them. We would spend the whole day visiting with Fabuloso's grandparents. We usually stayed until 10 p.m. On the second or third day, Grandpa says to me, "What time you two going to bed after you leave us?" He was barely able to contain his laugh. But his twinkly eyes gave him away. Grandpa has always been a tease and prankster.

My mom has been asking me to show everyone a picture of Grandpa when he was younger because Fabuloso and the Prince look so much like him. But, alas, the picture won't upload. I will have to work on it, or better yet get Fabuloso to do it. Here are some other pictures from Christmas 2006 when Grandpa came to Utah. 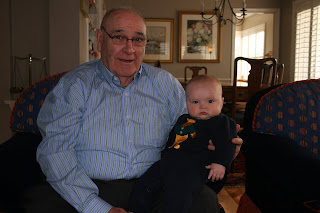 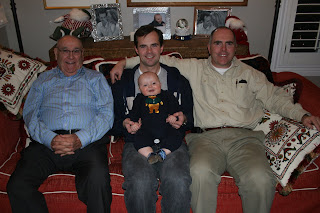 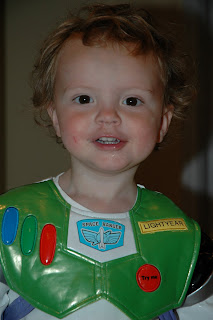 V and The Prince loved Halloween. They had four different parties in addition to Trick-or-Treating. It was so much fun.

My sister always does a great Halloween party for the extended family. Her husband makes a great chili for the party. Everyone is supposed to dress up, adults too. I didn't get a costume together this year. I gotta start planning earlier. V is in the back being held by my sister. 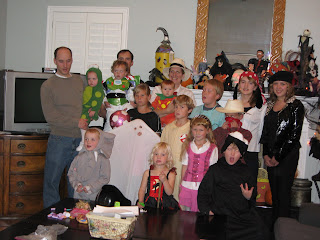 The Prince was Buzz Lightyear. He loved his costume, but eventually he would tire of it because it restricted his movement too much. V was a pumpkin, because we already had that costume. At one of the parties I left her in her pink bear pajamas. I think she looks so cute in those pajamas. When else is she going to wear them out? 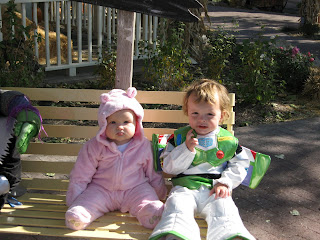 Trick-or-Treating was lots of fun. El Senor came along. The Prince was a little scared. At first he loved to knock on the door, but things quickly changed when people in costumes opened the door. He still talks about the witch that gave him candy. After that he wouldn't come close to the door until he saw that it was just a normal person who opened it. Then he would get the candy. One of his favorite treats was a toothbrush. He thought that was very exciting. The Prince actually enjoyed answering the door at our house the most. He loved to see all the kids coming to his house. He would help pass out the candy and yell, "Bye tids," when they left. He was elated. 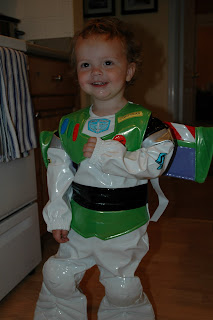