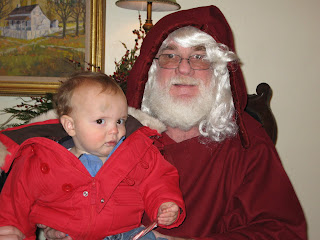 Our ward had its annual Christmas party November 30th at This Is The Place Heritage Park. It was a great event. I recommend every family go for the Candlelight Christmas. They have lots of different events for kids and adults to enjoy. We took The Prince to see Father Christmas for the first time while we were there. He didn't cry, but he was certainly skeptical. 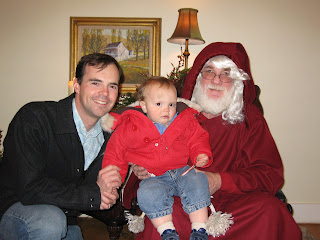 On December 1st we had our first big snow. The Prince loved going outside with dad in the snow. We don't have much snow gear for the poor little guy, but he didn't seem to mind. Luckily I had just bought a hat and a pair of gloves, which he kept on most of the time. The Prince especially loved getting his own shovel and pushing it around. He was very helpful. He also liked making snow balls and riding around in the shovel. He seemed a little unsure of being covered in snow, though. One thing he didn't like at all was having cold hands. He was very mad when he came inside. He was yelling at his hands. 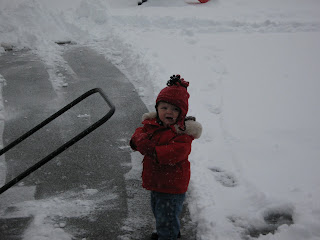 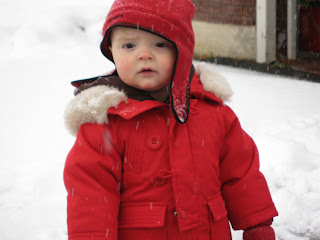 The following Saturday, we had another big snow storm. We had to repeat the whole procedure and take The Prince out to play in the snow. It was much colder and windier, so we did not play outside in the snow for long. The Prince took off his gloves and his hands got very cold. He was super mad at his hands when he came inside. I tried to warm them under water, but The Prince didn't trust me. He kept pulling his hands away and crying. I kept at it, of course, but I don't think he ever believed I was making things better. It looks like we will need some better gloves along with boots and snow pants. The Prince just loves to be outside. I know what to do to bundle him up, but what about me? I don't have a coat that covers my pregnant belly, or maternity snow pants. It looks like the poor kid will be stuck inside until Daddy can take him.

Oh, this conversation reminds me that we never posted the news that we are expecting in February. We are having a girl and everything is going great with the pregnancy so far.

Getting back to our snowy Saturday . . .
Dade called and asked me to take some pictures of him and his family for their Christmas card. The fresh snow made a beautiful scene. I went and took a bunch of pictures. They got some very cute ones to choose from. At one point, a huge gust of wind picked-up the snow and blew it in our faces. It was so cold. During the gust, I kept shooting pictures. Here are the results, and one good picture, too. 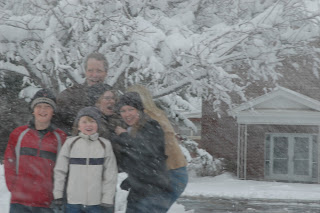 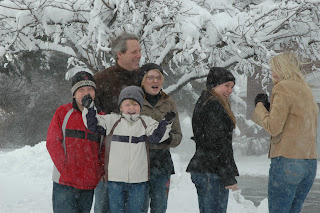 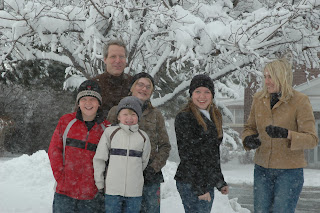 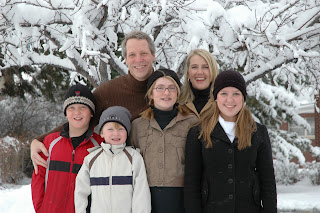 Ever since The Prince started walking, in August, he has had one bruise after another. His worst fall to date was when he fell head first on to the concrete playground next door. This picture was taken a few days after at our annual neighborhood zoo party in September. Between the fall and the party, The Prince also hit is head on the bed frame and fell down the entire flight of stairs at my mom's house. Luckily he did not hit is head on the ceramic tile floor at the bottom of the stairs. She-who-must-be-obeyed was supposed to be watching him. 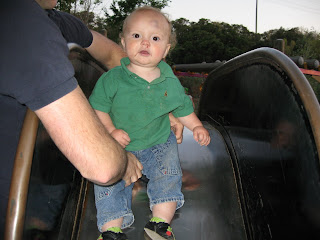 The following picture depicts The Prince's general feelings about hats. 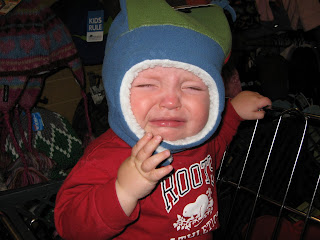 Here The Prince is with his prize possession . . . his blanket. 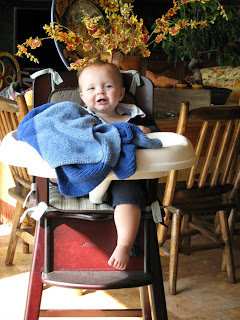 This is a picture of The Prince at Pioneer Village in Lagoon. He is all dressed for his cowboy pictures with some of his cousins and second-cousins. We were amazed the kids did so well. The picture really turned out cute. The actual picture was in sepia and cropped, but you get the idea. 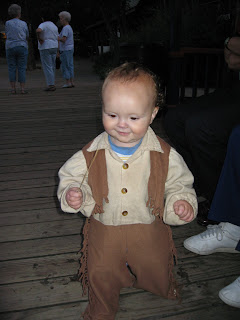 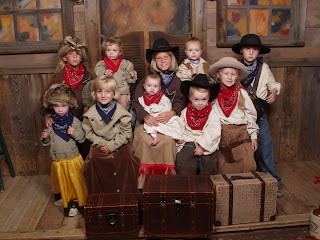 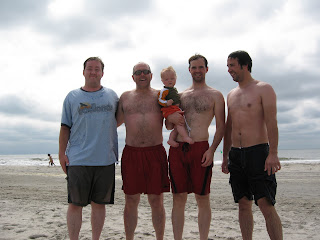 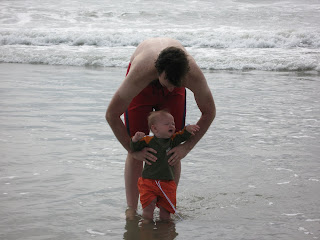 One of the main reasons we write a blog is to share what is going on here in Salt Lake City with my in-laws in Maryland. There hasn't been as great a need to blog this fall because they have been in Utah visiting every month. However, that really isn't much of an excuse for having the worst blog around. So, here is a quick update and a promise to do better:

In August, we went to Maryland to visit my in-laws. Everyone was there. We had a great time once we were there, but getting there was difficult. The morning we were to leave The Prince woke up with a high fever. I wasn't sure if we should even travel with him, but the pediatrician said it would be fine. We raced out to the airport only to find, after standing in line for a very long time, that my driver's license had expired in May. I had no other ID. Even if I had my passport it wouldn't do me any good because I haven't switched it to my married name yet. The DMV isn't far from the airport so I decided to take a cab and try to get my license renewed. I only had 40 minutes before the flight closed. While in the cab, Captain Fabuloso called and said they would accept my bar ID. Amazingly, I had my bar ID with the new expiration date on it. This may be the best thing passing the bar has done for me. The cab, who hadn't left the airport area yet, turned around and dropped me off free of charge. We made the flight no problem, but our non-stop flight to BWI was plagued with problems. We took off on time, but had to circle over Kansas for an hour and a half before being forced to land in Ohio to refuel because of bad weather in the East. We almost didn't get to leave Ohio. We were about to deplane when the flight attendant came on and told us to get back in our seats we were leaving. Many other planes did get stuck at the airport. We were grateful when we finally arrived at BWI. But the travels weren't over. We then had a 3 hour drive to Ocean City, NJ. Through all this The Prince held up very well. He was fussy and would cry a bit, but considering how sick he was, he did very well. Captain Fabuloso was fantastic at taking care of him, especially when I started to get motion sick on the decent. We don't have many pictures from our trip to Maryland because Ootsie was the main photographer, but I wanted to share a couple of pictures on the beach in Ocean City. The Prince did not like the cold water. He was sick most of the trip to Ocean City and Maryland. It also rained during our stay in Ocean City, so we didn't spend much time on the beach.

While in Maryland, Cicada got engaged to Murray. We were all thrilled. They set the wedding date for November 3rd. In order to get ready for the wedding to be held in Utah, Ootsie and Grandpa visited in September at different times. We always love having them visit. Here is a picture of Grandpa and The Prince. It is a perfect example of the kind of interaction between the two . . . lots of teasing and horsing around. 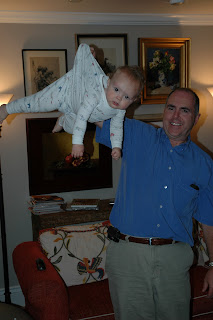 Ootsie came out two weeks before the wedding to get ready. Originally, she didn't think she would have much to do, but days before she left she and Cicada decided to fire the caterers and put on the wedding themselves. There was plenty of work to keep everyone busy. The wedding turned out absolutely beautiful. It was fantastic, and for complete information on the wedding you will have to go to Cicada's blog. She has great pictures and details to share.

Grandpa came out a week before the wedding, and then Grandpa McGinn and Dougie followed. Ootsie and Grandpa were here to celebrate Halloween with The Prince. It was so much fun. We dressed The Prince up as a puppy. He looked adorable and even kept his puppy hat on. The Prince even said, "Oof, oof." when asked, "What does the dogie say?" He never was able to pronounce the "w" in "woof."

In addition to trick-or-treating we had two great Halloween parties this year: one with the neighborhood at our house and West's, and one at my sister's house. They both were a great success. My sister does a fantastic job putting on the Halloween party every year. We are all so grateful to her for doing it. It really is a fun event. All my Freed cousins come with their kids. Everyone dresses up and the food is great. We only have pictures of The Prince crying in his costume. Tommy Tom was the Grim Reaper. The Prince took one look at his face and started to cry. 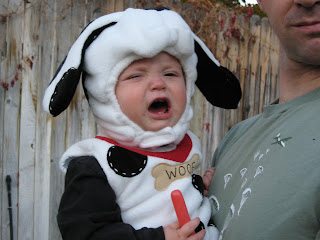 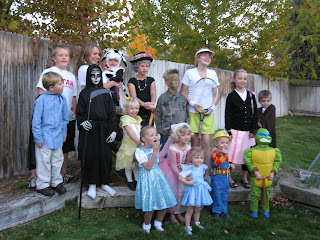